The long road to Osio

Don't look at me like that, yes I had said in previous blogs that I had explored Osio Intergration and rejected the idea. Because of the way the finished thing looked and the 'leakage' issue.
But I had to have yet another neuroma and a cyst removed from the stumpy, and was told this will be a yearly thing.
Also I got another sweat blister on the end of the stumpy and I wasn't even exerting myself.
So enough is enough, I spoke to my plastic surgeon and my private prosthatist at PACE to get the ball rolling.
I've also decided to do a vlog as there isn't much on youtube about anyone going through this from start to finish. Who to contact, the costs, what the operation looks like, physio etc etc.
I know the risks, you can get an infection in the end that can travel up the bone, resulting in you having to have your bone cut back up to the point where the steel pin was inserted.
If I have a bad fall and the femur cracks, again leg cut shorter, and in my case it would be nearly all my leg and I would either have to wear a permanent belt to hold my leg on or that horrible over the shoulder strap device.
Also if I do fall and land on my knees, there is a fail safe. The pin that is at the entrance to the top takes the pressure and breaks instead. This is good, but then I have a broken pin that I have to get on a plane to Germany to fix.
That's the other down side, this is still a relatively new procedure. There are experts in Australia, Holland and Germany. There are consultants in London but they are a branch of the Australians.
So I've decided to go to Germany.
Also this is not on the NHS yet, and I've been given a rough guide price of 30k, yep 30 grand for everything, the operation, the physio, the stay in hospital and flights to Germany.
This is what I've been told will happen:

1) See consultant in Germany, if you need to you will have a date for an operation to cut back and thin out the end off your stump as close to the bone as possible for better pin connection.
(I don't need this part that's why my plastic surgeon said I was ideal.)

2)You have operation number two, they open up the end of your stumpy, take out the marrow in your femur, and screw in a pin then sow up the pin inside and leave you for a couple of months. This is so the bone grows around the pin securing it.

3) Then if no complications i.e rejection/infection the end is opened up and the outer pin is put on that the leg will finally attach too.

4) You are then months in physio having small weights put on the end of the outer pin to get used to the weight of the leg. You are also taught to press down on it too so you take the weight through the bone.

5) Finally the leg is clipped on and I will be re-taught how to walk, as I have been taught to swing from my hip with a socket leg, now I have to try to walk normal again.

6) Invent some sexy upper leg coverings to hide the freddy Kruger penis leg so I can wear shorts.

all In all they say 2 years. which isn't too bad if you think if I do nothing I will be in hospital every year with neuromas, which I won't get as they are like pressure blisters internally. So as the weight is now through my femur like it should be they wont flare up.

I've decided to have this operation after my 40th (late 2019) As I want to do something fun for that and don't want to be in my chair.

Below is an xray and an MRI of my leg I was given to pass on to the German Osio surgeon.
I find it so fascinating, in the xrays you can see my intestines, and the MRI looks like a slice of meat :) 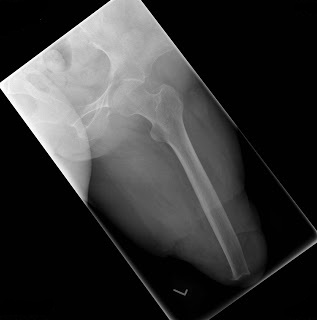 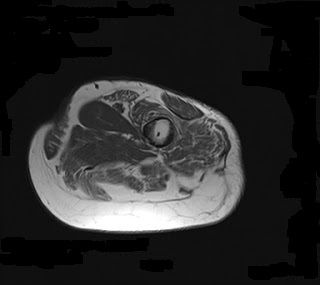 Posted by Suzannah Unsworth at 13:02 No comments:

Suzannah Unsworth
A full of life goth chick, who loves the outdoors, walking her dogs, hiking,roleplay and generaly having a laugh.